Skip to Content
Home Brands Sqwincher Drink Is Sqwincher Gluten-free? (Everything You Must Know) 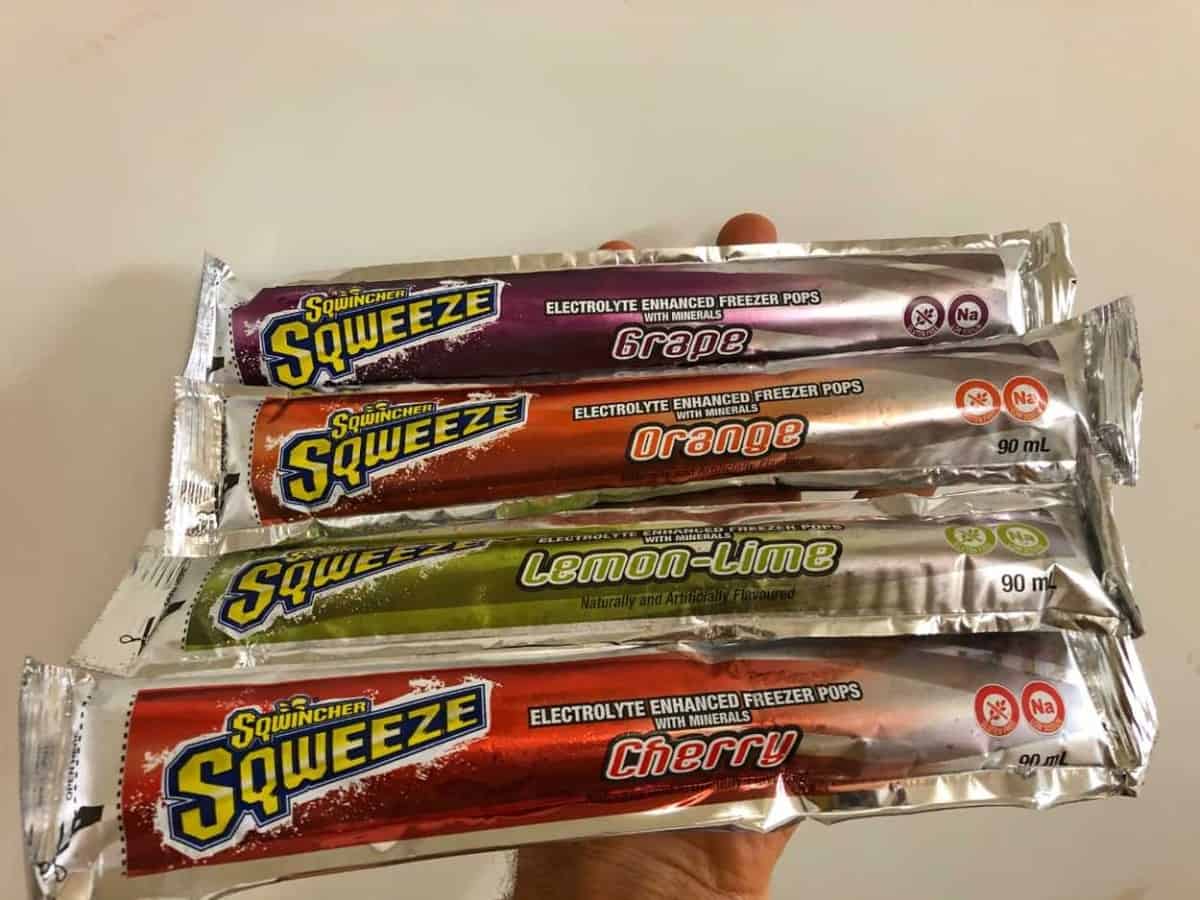 Is Sqwincher Gluten-Free? -Gluten is naturally present in foods such as Wheat, rye, and barley; sometimes it is also added to different drinks and foods to add texture, thickness, and flavor.

However, such food and drinks are not always suitable and consumable by everyone. Some people suffer from gluten sensitivity due to which they are unable to consume foods rich in gluten.

The Sqwincher energy drink is gluten-free. It does not have any traces of gluten, which makes it safe for people suffering from celiac disease.

Let’s discover the ingredients of the Sqwincher powder and check if it is truly gluten-free or not.

What Is Sqwincher Energy Drink?

The Sqwincher Energy drink is a hydrating drink containing various minerals. It does not contain caffeine or vitamins so it is not likely to give you a significant amount of energy boost.

It is quite unusual for an energy drink not to contain caffeine because people think that caffeine is the main source of an energy boost. However, Sqwincher works in a different way than other energy drinks.

As Sqwincher activity drink makes you refresh all of a sudden by hydrating you really well, so it can be said as a hydrating or mineral drink.

The Sqwincher activity drink is a product that is owned by the Kent Precision Foods Group, located in the United States.

Sqwincher powder comes in 2 different forms; one contains sugar while the other is free of sugar. The content of the nutrient is different in both of the forms of Sqwincher energy drink.

Let’s check out whether the ingredients of Sqwincher are free of gluten or they contain gluten.

Following are the Sqwincher powder ingredients:

You may check out my Sqwincher Nutrition Facts article if you want to learn more about its formulation in detail.

Caffeine is one of the world’s most commonly consumed drugs. It is available in coffee, tea, and a few sodas.

Caffeine is a drug consumed to create a stimulating effect. It enhances attentiveness and reduces fatigue. It also increases the capacity to accomplish tasks that require physical or mental effort.

However, according to one study, caffeine intake can result in adverse side effects such as nervousness and wakefulness. Caffeine is also potentially related to heart disease and stroke.

But the good news is that Sqwincher activity drink does not really have any caffeine in it. Therefore, anyone who does not want to consume caffeine, but wants to get good refreshing effects, so they can consume Sqwincher.

Does Sqwincher Zero have Caffeine?

Calories are the unit which is used to measure the energy from food, one gets. The excessive amount of calories is stored in the body as fat if they are not burned.

Where to Buy Sqwincher Drink?

Sqwincher Drink is not available to be bought on its website and it is also not available at the stores. However, it can be conveniently bought from websites such as Amazon and Walmart.

Where can I buy Sqwincher Zero?

Sqwincher Zero can also be bought from the same websites as Sqwincher Original.

If you’re thinking of making a large purchase, make sure to check out Where to buy Sqwincher article.

Gluten is a type of protein or more precisely amalgamation of two other proteins. This gives your food, like the dough, a sticky appearance.

It gives a particular texture and flavor to the food. Foods such as rye, wheat, and barley are rich in gluten; pasta, bread, other bakery items are made up of this glutinous food.

The following are free foods that contain no gluten at all:

In order to know whether the Sqwincher drink is really gluten-free or not, let’s check its ingredients in the table below:

In the table above, it can be seen that the ingredients found in the Sqwincher drink are totally free of gluten. So you can consume a Sqwincher energy drink without worrying about anything.

Is there Sugar in Sqwincher Drink?

Sqwincher contains sugar, however, the amount of sugar it contains is insignificant and too low.

There are around 11 grams of sucrose in Sqwincher original, and Sqwincher Zero contains no sugar at all.

However, limit 2 drinks per day and not any more than that as little amounts of sugar can add up with each other to make a significant quantity of sugar.

In order to stay on the safe side, consume Sqwincher activity drink moderately.

Following are the side effects of sugar:

Other than sucrose, Sqwincher energy possesses Sucralose and Dextrose as sweeteners.

Another sweetening ingredient in Sqwincher is Sucralose. It is also an artificial, non-nutritious sweetener. However, in contrast to sugar, there is no addition of calories in Sucralose. Furthermore, the 600 times sweeter effect of Sucralose makes it better than sugar.

It is nutritious in contrast with Sucralose and sugar. Besides, it is also 20% less sweet than sucrose. Dextrose is usually utilized to treat diseases such as hypoglycemia. Nonetheless, extreme consumption can be merely as detrimental as any kind of sweetener.

Due to the presence of Sucralose, dextrose, and Sucrose, a person can feel bloated, and one can also experience severe conditions such as cancer, intestinal disturbances, etc.

The Sqwincher activity drink is a keto-friendly drink as it contains only a little amount of sugar.

Other than this, it does not contain any other carbohydrate. So it is a keto-friendly drink.

Sqwincher energy is quite unique in its formulation and it is not like ordinary energy drinks; the benefits of Sqwincher states the good reputation of the drink:

Is Sqwincher Good or Bad for You?

Sqwincher can be good for you if you consume it within a moderate limit. If you consume it excessively then it can have some harmful side effects as any other conventional and typical energy drink.

Moreover, limited usage can hydrate you quite well. But if you consume it a lot, then it can create an imbalance in the range of electrolytes and too many electrolytes can have negative side effects as there is a particular requirement of electrolytes in the body.

If you want to read a complete discussion on how much Sqwincher should you consume in a day and why then I would recommend you to read the article “How many Sqwincher can you drink in a day?“

The Sqwincher electrolyte beverage mix is a pure mineral drink with a little bit of sugar and other few ingredients. It does not contain any caffeine or vitamins for giving you a significant amount of energy.

It is not an energy drink, it is a hydrating electoral drink. So it will hydrate you really well and you can consume it right after a workout to fulfill all the fluids lost during the workout.

Moreover, it contains a good amount of minerals, making it a good hydrating drink.

It is also a gluten-free drink so anyone with gluten sensitivity can consume it.

Try to limit the usage of Sqwincher Sqweeze to the limit of 2 servings per day. 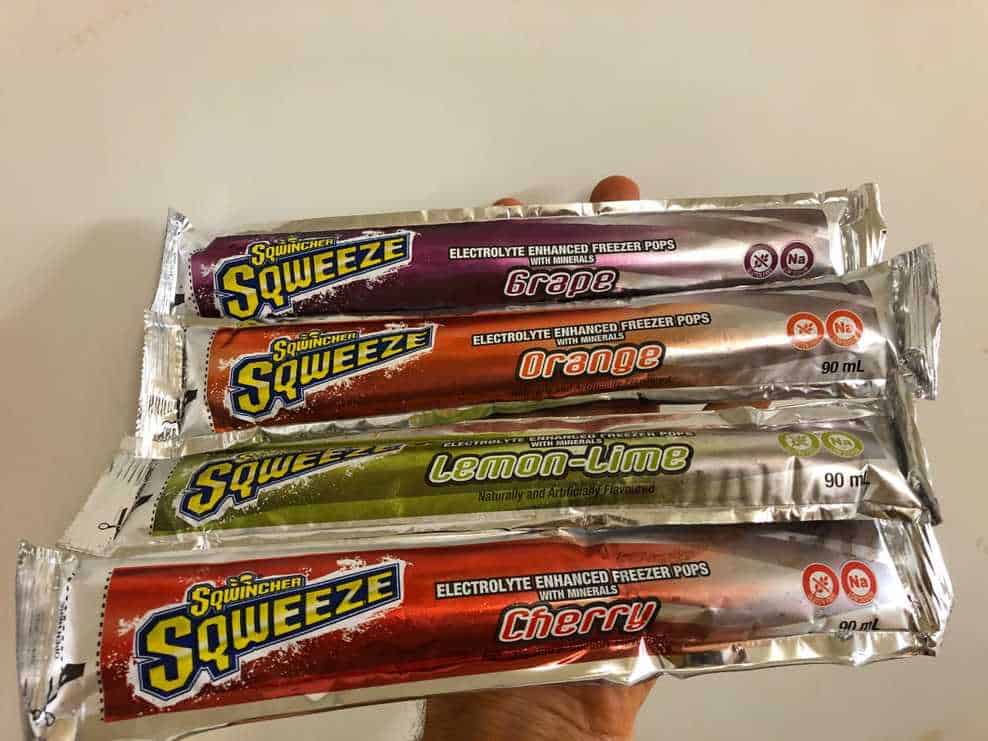